The itinerary starts and ends in the city of Alba, passing through two of the Langhe’s most important towns, Grinzane Cavour and Diano d’Alba. Start from Alba, in the San Cassiano quarter, the site first of the funerary basilica and then the abbey of San Frontiniano. According to tradition it was built at the start of the 4th century. Leaving the city of Alba and heading towards Gallo, you will reach Grinzane Cavour. In the main square, you’ll find the entrance to the impressive castle, rising up over the lush Langa vineyards. The historic residence, built in the 11th century, belonged to the Clermont – De Tonnerre dukes, uncles of Camillo Benso of Cavour, who was elected mayor of the town in 1832. Today the castle is home to the Regional Enoteca and a highly regarded restaurant. From Grinzane Cavour, continue to Diano d’Alba, where you can still see the remains of the castle built around the year 1000 to defend against Saracen raids. From Diano d’Alba, take the provincial road back towards Alba, making a small detour to visit the hamlet of Santa Rosalia, where you can admire the memorial pillar built using Russian soil, commemorating the Italian soldiers killed during the last war. Having returned to Alba, stop in Corso Langhe to visit the church of Santa Margherita. The itinerary concludes with a visit to the cathedral of San Lorenzo, the oldest religious building in the city, rising majestically in the main square. 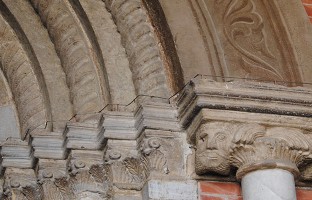