This Upper Langa itinerary winds along a very scenic route, starting from Roddino, where the church of Santa Margherita preserves some Romanesque features in the side walls. Heading towards the provincial road, continue to the village of Cerretto Langhe, where you can admire the 13th-century church of Sant’Andrea. Of particular interest is the imposing stone tower, whose entrance arch keystone features a carved lamb. The route continues to Arguello, known as the “village of the cuckoo”, and home to a jewel of Romanesque architecture: the church of San Frontiniano. The sacred building dates from the 12th century and was built by Benedictine monks from the abbey of San Frontiniano in Alba. From Alba, turn back towards Serravalle Langhe, an ancient village in the middle of four ridges, with minor valleys branching off. In fact the name Serravalle comes from “serra le valli”, “closes the valleys”. In Serravalle, the chapel of San Michele in the hamlet of Castellera is worth a visit. The apsidal part of the chapel is very interesting, with the lower part of the Romanesque apse completely in stone and the small bell tower in stone and brick. From Serravalle, continue on to Bossolasco, the last stop on the itinerary. 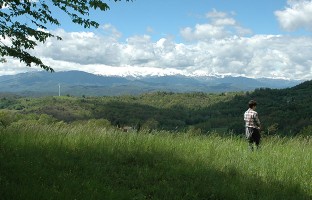